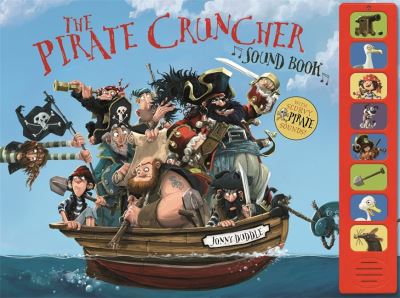 Log in to view theme keywords.
A gang of pirates go to find treasure on an island guarded by the pirate-cruncher. Includes eight sound effect buttons to accompany the story

A gang of pirates go to find treasure on an island guarded by the pirate-cruncher. Includes eight sound effect buttons to accompany the story

When an old pirate tells a tavern full of salty sea dogs about hidden treasure, the motley pirate crew decide to set sail for the mysterious island, guarded by the terrible Pirate Cruncher.

When they finally find it, a hilarious fold-down flap shows that the island itself is the Pirate Cruncher, and it swallows their little boat whole.

Hear the fiddler's song, the pirates' laughter and screams of cowardly fear, then the Pirate-cruncher CRUNCH... followed by a monstrous burp!