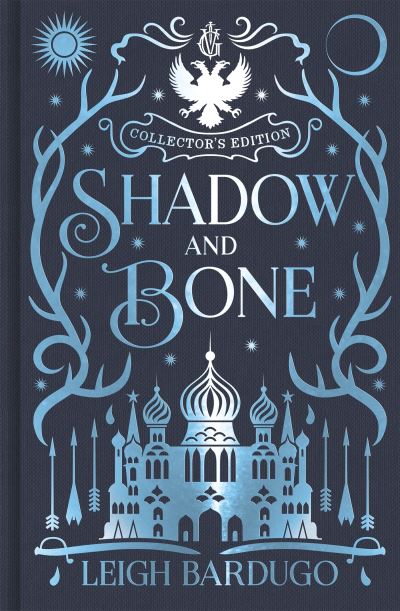 Read from the beginning with this deluxe hardback collector's edition of the first novel in the worldwide-bestselling Shadow and Bone Trilogy by Leigh Bardugo! This edition features:

Read from the beginning with this deluxe hardback collector's edition of the first novel in the worldwide-bestselling Shadow and Bone Trilogy by Leigh Bardugo! This edition features:

Soldier. Summoner. Saint. Orphaned and expendable, Alina Starkov is a soldier who knows she may not survive her first trek across the Shadow Fold-a swath of unnatural darkness crawling with monsters. But when her regiment is attacked, Alina unleashes dormant magic not even she knew she possessed.

Now Alina will enter a lavish world of royalty and intrigue as she trains with the Grisha, her country's magical military elite-and falls under the spell of their notorious leader, the Darkling. He believes Alina can summon a force capable of destroying the Shadow Fold and reuniting their war-ravaged country, but only if she can master her untamed gift.

As the threat to the kingdom mounts and Alina unlocks the secrets of her past, she will make a dangerous discovery that could threaten all she loves and the very future of a nation.

Welcome to Ravka . . . a world of science and superstition where nothing is what it seems.

Read all the books in the Grishaverse!

The Language of Thorns: Midnight Tales and Dangerous Magic

Praise for the Grishaverse

"A master of fantasy." -The Huffington Post
"Utterly, extremely bewitching." -The Guardian
"The best magic universe since Harry Potter." -Bustle
"This is what fantasy is for." -The New York Times Book Review
"[A] world that feels real enough to have its own passport stamp." -NPR
"The darker it gets for the good guys, the better." -Entertainment Weekly
"Sultry, sweeping and picturesque. . . . Impossible to put down." -USA Today
"There's a level of emotional and historical sophistication within Bardugo's original epic fantasy that sets it apart." -Vanity Fair
"Unlike anything I've ever read." -Veronica Roth, bestselling author of Divergent
"Bardugo crafts a first-rate adventure, a poignant romance, and an intriguing mystery!" -Rick Riordan, bestselling author of the Percy Jackson series