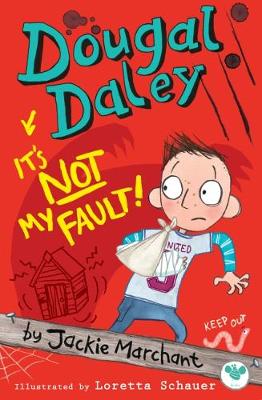 It's not my fault!

Log in to view theme keywords.
Follow the trials and tribulations of Dougal Daley and the various mishaps that befall him.

Follow the trials and tribulations of Dougal Daley and the various mishaps that befall him.

"I, Dougal Daley, am dead! Ok I m not actually dead. But if I m not careful I soon will be."

In this first book, football-loving Dougal Daley finds himself at risk from the mysterious creature living in the garden shed.

Nobody believes him but as a precaution, he sets upon writing his will - rewarding those who help him and disinheriting those who get on his bad side.

Meanwhile, as limbs and windows alike are broken by rogue footballs and unhinged canines, Dougal finds himself in all sorts of trouble... and NONE of it is his fault!

NOTE : The letters from Dougal's friends are written in a variety of scripts that some may find hard to read